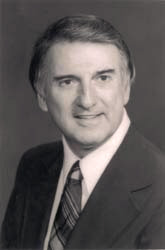 First male in the United States to be appointed as a family life extension specialist when he was hired by Rutgers University. During that time he developed programs for 4-H clubs, wrote pamphlets for parent education groups and developed exhibits for county fairs.

At the age of 23, had a regular column for The New York Sun.

First male appointed as department head in the College of Home Economics at the University of Georgia.

Among the first men to be honored as an AHEA Leader.

Recipient of the Osborne Award, presented annually by the National Council on Family Relations to the outstanding teacher in family relations.

1989 recipient of the College of Family and Consumer Sciences’ Creswell Award for his work with students.

Has a graduate student scholarship in his name at Florida State University.