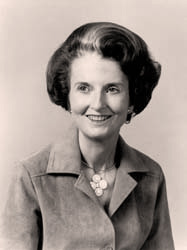 Janette McGarity Barber received her BSHE degree in 1938 and MA in 1966 from the University of Georgia.

Served as State Leader of the Georgia Future Homemakers of America for more than 25 years.

Recipient of the first Distinguished Alumni Award from the College of Home Economics Alumni Association in 1981.

Served as a member of the National Advisory Committee on Children and Youth that planned the 1970 White House Conference on Youth.

First advisor to the Georgia Association of Future Homemakers of America. During the time she was advisor, membership grew from 7,332 to 32,598.

Editor of Historic Georgia Mothers, a work featuring 25 historic Georgia women that was published in 1976 as an official Georgia project for America’s Bicentennial Celebration.