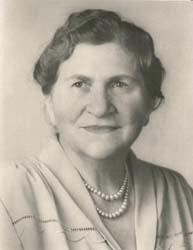 Leila Ritchie Mize received her BSHE in 1924 and MS in 1930 from the University of Georgia.

A pioneer extension leader in Georgia, having been appointed the first Home Demonstration Agent in Jackson County in 1916.

An active leader in the formation and development of the Georgia State Home Demonstration Council.