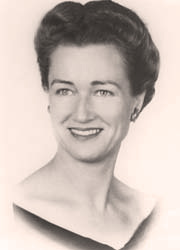 Leonora Anderson received her BSHE from the University of Georgia in 1929 and her Master of Science degree from Cornell University in 1953.

Upon graduation from UGA, she launched her career as a home demonstration agent in Taylor, Crawford, Mitchell, Houston and Peach counties where she was noted for her ability to involve and inspire both young people and adults to do their very best.

In 1935 she was appointed as a clothing specialist with the Georgia Cooperative Extension Service and in 1945 became a District Agent.

In 1947 she traveled to China to do food preservation work.

Member of the Presidents Club at UGA and Epsilon Sigma Phi.

In 1984, she established the Leonora Anderson Scholarship in the College of Home Economics.