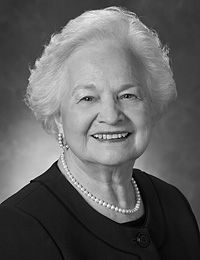 Louise earned her bachelor degree in home economics in 1959 and her master’s degree in housing and management in 1969.

She was only the second woman to serve as a district director when she was named to head the 18-county North Central District, overseeing agents in community development, agriculture, 4-H and family and consumer sciences.

During her time as a district director, Cooperative Extension faced the most severe budget cuts ever to befall the organization, resulting in more than three dozen of Louise’s employees losing their jobs. However, Louise helped those laid off to find new positions. She also successfully managed growth of her district from 18 counties to 40.

Louise was an early innovator in recognizing the need for developing communities by enhancing the skills of local leaders. She recognized the untapped potential in many women and minority groups, as well as traditional leaders, and facilitated experiences that helped them blossom into passionate, skilled change agents.

She spent more than 30 years with the University of Georgia Cooperative Extension, retiring in 1993 as a district director.

Since her retirement, Louise has embarked on a second career as a Realtor with Coldwell Banker Upchurch Realty in Athens. She has been named to the President’s Circle annually since 2000 and is an active member of the Million Dollar Club.