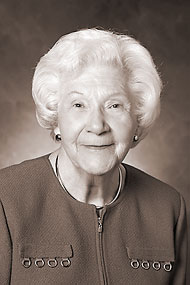 Marian Chesnut McCullers (BSHE ’46, Housing and Consumer Economics) has been a pioneer and a trailblazer for family and consumer sciences graduates in business since she began her career at Atlanta Gas Light Co. in 1946.

Marian remained with AGL for 41½ years, rising through the ranks until, ultimately, she was named vice president for consumer information and education in 1986.

During her earliest years with AGL, Marian and the other home economists in the Home Services Division spent much of their time traveling to customers’ homes demonstrating how to use AGL products. They also served as testers for new products, cooking all types of food on new ranges to determine if they deserved the AGL seal of approval.

Throughout her career, Marian searched for the most innovative ways to reach her audiences. She was among the first home economists to record one-minute educational messages that aired on radio and, likewise, she coordinated an educational TV show for 10 years that taught homemakers new cooking skills.

As one of the first women to move into management at AGL, Marian worked hard to open doors for others.  Marian’s efforts were successful and a number of women followed her into management positions at AGL.

Despite her demanding career, Marian has also stayed active with the College of Family and Consumer Sciences and the University of Georgia since her graduation, working closely with faculty and administrators to establish relationships with the business community and create a number of internships.

Her support for College of Family and Consumer Sciences also led Marian and her late husband, Wilton “Butch” McCullers, to establish a scholarship in 2005.

Marian has served as president of the Georgia Home Economics Association and chair of the Home Economists in Business. She also is active in her church, Clairmont Hills Baptist Church, the DeKalb County Historical Society, the High Museum of Art and the Atlanta Athletic Club.