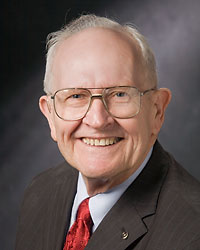 Dr. Flatt’s first encounter with College of Family and Consumer Sciences was in 1970 when he was named director of the UGA Experiment Stations.

He was recruited by the Department of Foods and Nutrition to conduct research in energy metabolism and to teach basic human nutrition after stepping down as dean.

Dr. Flatt has established three endowed scholarships and one endowed professorship in addition to charitable gifts he has made to other organizations.

The scholarships within Family and Consumer Sciences are: the Flatt Nutrition Excellence scholarship for a Graduate Student in Foods and Nutrition; the Gladys F. “Nannie” Nesbitt-Flatt Scholarship which is designated for an undergraduate Foods and Nutrition student; and the Flatt Academic Achievement Award which is awarded to a student with a 4.0 within College of Family and Consumer Sciences and also to the Gamma Sigma Delta annual winner. The “Outstanding Senior” within our college also is awarded from the Nesbitt-Flatt endowment. Thanks to Dr. Flatt’s selfless contributions, students receiving these scholarships are able to continue their college careers.