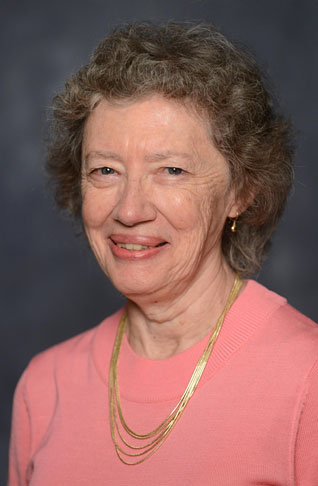 Talk to enough people about Zo Stoneman, and a pattern emerges.

Then, they will laugh. First impressions, they’ll tell you, are misleading.

“She’s a very tiny and petite person,” said longtime friend Beth English, the executive director of Easter Seals Southern Georgia, “but she’s just a fireball, like a stick of dynamite. She truly is.”

Stoneman herself might agree. As a young girl, long before she became a giant in the field of disability research and advocacy, she developed a stubborn streak – some have politely called it “tenacity” and “persistence” – that has served her well in her 40-year career at UGA.

“Even as a kid,” she said, “the one thing that would motivate me to do something is if somebody told me I couldn’t do it or I didn’t have the ability to do it or girls shouldn’t be doing it or whatever. That would be the one thing I’d set my sight on.”

Though it became an asset in a field marked by agonizingly slow, often frustrating, progress, this character trait was not always so endearing, Stoneman admitted.

“My mother had other, less flattering, words for persistent,” she added, laughing.

Stoneman arrived at UGA in 1976 as an assistant professor in what was then called the department of child and family development, fresh off the campus of George Peabody College – now Vanderbilt University – in Nashville.

She also served as director of the children’s program of the University Affiliated Facility located at River’s Crossing, where students received training to work with children with developmental disabilities, many of whom were housed there during the week

Stoneman and colleague Mary Rugg soon established one of the state’s first inclusive preschool classrooms in 1984 by having the facility’s students join with students at the McPhaul Child Development Center, the UGA lab for typically-developing children.

This innovative approach became a hallmark of Stoneman’s career, as she has worked to promote inclusion and acceptance in a society that often has been resistant to it.

“These are people who have gifts to give to their families, to others, and they’re being stuck away as if they’re unimportant in places where they have little to no control over their lives,” Stoneman said, “and very little ability to reach out and be a part of the world we all live in. Not only are their lives being compromised, but the communities are losing their gifts.”

Among her many career accomplishments, Stoneman, as founder and director of the Institute on Human Development and Disability, has been instrumental in several efforts to foster change.

Among them, she has:

- Worked to chronicle the struggle for disability rights in Georgia through the co-founding of the Georgia Disability History Alliance.

- Served as a founding member of the Children’s Freedom Initiative, formed to promote the idea that children belong with loving, permanent families – not in institutions or nursing homes.

- Worked with colleagues to establish a Disability Studies Certificate program at UGA.

- Documented the transition of 39 former residents of River’s Crossing, the first institution in Georgia to close, into the community, providing valuable data on the importance of inclusion.

Stoneman’s work earned her the UGA Creative Research Medal, given to recognize outstanding research that focuses on a single theme.

In Stoneman’s case, much of her work has centered around sibling interaction and dispelling the commonly-held notion that being the sibling of a child with a disability was inherently damaging.

In 2002, Stoneman was named a University Professor, a distinction that recognizes faculty members who have had a significant impact on the university in addition to fulfilling their normal academic responsibilities, and whose work as “change agents” improve the quality with which UGA serves its missions.

Stoneman, born in inner city Chicago but raised mostly in rural Illinois, said she never set out to pursue a career in the field of disability research, but quickly found she had a passion for it.

“Once I got to know children and realized there were kids who had some real struggles, I thought I could figure out some ways of helping,” she said.

Folks ask her when she’s going to retire. She smiles. She’s not ready, she says. There’s too much work to be done.

“My passion really flows from an image of communities where everyone has a meaningful role to play and is welcome, where there are not people who are marginalized,” she said. “We’ve come a long way toward communities that work like that. We still have a long way to go, but there’s no reason that it’s not possible.

“And knowing that by continuing to work for these things, it’s possible to really make a difference, particularly for people whom I can conceptualize, think about and know. That’s why I haven’t retired.”