Established in 1999 in honor of the fourth dean of the College, this award is presented to graduates who have attained substantial achievements and are at the midpoint of their careers. 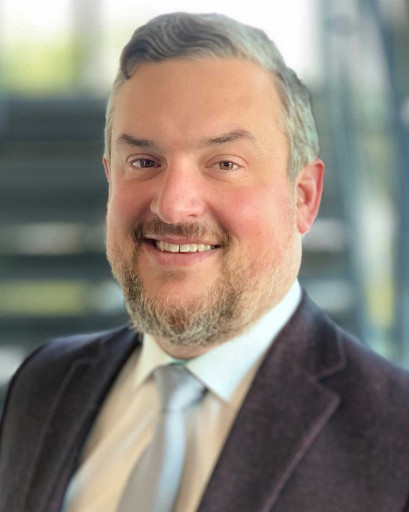 A decade ago, Scott Edwards took a bit of a professional gamble.

After several years serving as a consultant and then as a partner with a physician recruitment firm in Irving, Texas, Edwards launched out on his own.

He and a business partner co-founded Adaptive Medical Partners in 2010 with no outside investors.

His company now employs over 30 people with clients in 45 states and has been recognized as one of the country's fastest growing businesses three times by Inc. Magazine.

AMP also has been named to the Bulldog 100 list, which recognizes the fastest-growing businesses owned or operated by UGA alumni, four times.

"He is a perfect example of how lessons learned in FACS can be used to meet the needs of the future," said Anne Sweaney, the Josiah Meigs Professor Emerita who taught Edwards during his time in the college. "I know Emily Quinn Pou would be so proud. She always wanted FACS to earn 'shoulder to shoulder' respect across campus, and she'd be very proud of Scott and his foresight of future trends and solutions."

It was not easy in the beginning. Because of a non-compete/non-solicitation agreement with his previous employer, Edwards could not call on past clients, recruit former associates or operate his startup within the 75-mile non-compete radius.

In early 2011, Edwards' company negotiated a settlement with his previous employer that allowed him to headquarter his company within the Dallas/Ft. Worth metroplex.

Not long after relocating, the company began to grow, and soon built a new chic industrial/open-concept, 10,000 square foot building in the white-collar district of Las Colinas. Edwards and his partner also enjoy success in commercial real estate with holdings in both Georgia and Texas.

"He and his leadership team have created a unique, character-driven and positive culture," said Christopher Ray, a faculty member at Texas Woman's University in Denton, Texas and former UGA classmate of Edwards. "Scott is a great example of what can be accomplished when talent and hard work intersect with passion and expertise. He embodies the spirit of this award and represents our alma mater with high distinction."

Edwards' interests go well beyond the business world. He's also passionate about improving his community through volunteer work and service via his church.

Edwards also serves on the external advisory board at Texas Woman's University and the communication committee for the National Association of Physician Recruiters.

"Scott is a very entrepreneurial, smart and determined individual," FACS faculty member Dee Warmath said. "He has built an amazing business that addresses challenging needs that often go unrecognized and he continues to identify innovative approaches to move that business forward."